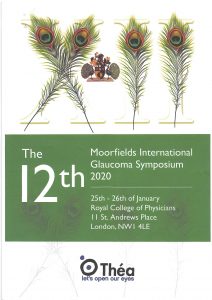 I attended the Moorfields International Glaucoma Symposium recently in London. Many interesting talks were delivered on a number of glaucoma topics at this two day conference.

Although there was much that was interesting, the most original and novel lecture was on the benefits of meditation on glaucoma – this attracted a lot of interest. A team from India looked at the benefits of mindfulness meditation in a group of glaucoma patients. In this well designed, scientific study, the researchers studied 90 glaucoma patients who were taking glaucoma drops. They were randomly divided into half – one group received a 3 week course of meditation instruction by a yoga instructor for one hour every morning. The second group did not meditate. Both groups continued their glaucoma drops. After 3 weeks, 75% of the meditation group demonstrated a 25% drop in their eye pressure. Those who did not meditate showed no difference in their pressures. Interestingly, the meditation group also had lower levels of markers of stress and inflammation in their blood after three weeks (cortisol). Meditation also increased the levels of “good” or beneficial markers involved in regeneration and repair (brain derived neurotrophic factor). No changes were observed in the non- meditating group.

This landmark study suggests that one can use meditation in order to lower stress hormones in glaucoma patients, with a measurable benefit on the eye pressure. There are likely to be other longer term benefits on the progress of the disease, but these need to be studied further. As one might expect, the researchers also found that meditation also improved the patient’s sense of general well-being. As a glaucoma specialist I also see one other attraction of meditation which is this: I spend a lot of my time counselling and managing the side effects of our glaucoma treatments – namely the side effects of drops, and the admittedly rare risks of interventions such as laser and surgery. Meditation really has no side effects or drawbacks as far as I can envisage, other than perhaps the time commitment required to do it. But this may not be so onerous, as it is suggested that you can get a useful effect with as little as 15 minutes, three times per week. You can also get mindfulness apps on your phone that can help (Calm and Headspace are two of the most well known, although I haven’t tried them!).

I am happy to recommend meditation to my patients and I think we will see further research interest in this area over the next few years. I would be very interested to hear from any of my patients who have tried this.