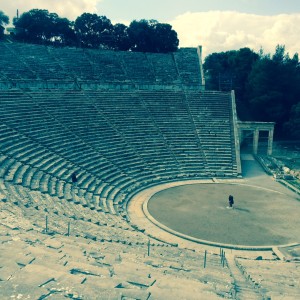 I was invited to speak recently at the 11th Pan-Hellenic vitreo-retinal meeting, held in Athens. This was a welcome chance to catch-up with my many Greek friends and colleagues. Some I trained alongside and others I have helped train during their time spent at Moorfields. I was invited to oppose the motion of a debate “screening is mandatory in uveitis”. My brief was to argue that it is not necessary to perform endless blood tests to diagnose inflammatory eye disease (uveitis).This practice is usually not necessary, is wasteful of resources, and can cause patient anxiety.
Debates are quite popular in medical society meetings, as they are a way of summarising the science that might support both sides of an argument to the audience. Of course, the truth sometimes resides somewhere in the middle, but I think, on balance, that I helped to defeat the motion. After the meeting, I was invited to join colleagues on a 2 day guided tour of the archaeological sites of the Peloponnese. This was an excellent opportunity to meet ophthalmologists from across Europe and share experiences, whilst at the same time seeing some fascinating archaeological sites.
On the tour, we visited Olympia , the site of the ancient Olympic Games. We stayed overnight in a charming mountain retreat, and were surprised by the light dusting of snow the next morning. That morning we then visited Mycenae, which is the centre of the Bronze Age Mycenaean civilization, from 1600 BC to 1100 BC, that predates that of classical Greece. We visited a Mycenaean tomb, possibly of Agamemnon, and the impressive remains of the palace. Finally, we visited Epidaurus, which is the site of the best preserved amphitheatre in Greece. This is still used occasionally to stage plays, and can hold 16, 000 people. This theatre is famous for its remarkable acoustics – for example an actor’s whisper from the stage can be heard with perfect clarity by all audience members, even by those seated up in the “gods” in the highest and cheapest seats of amphitheatre. Also of interest to the group, as surgeons, was a small adjacent museum exhibiting some archaeological finds, including some fine surgical instruments, as this area was a centre for healing. I wonder if they had ophthalmologists?